Most of the Mass Media news today, is about pushing the non-corruption of our voting system, and the few “harmless” changes which will make voting “more fair”, all in the name of social justice.

Make no mistake, we are witnessing evil personified in the Democrat Party. The Democrat socialist leaders do not want individual free will. After all, Socialism, Communism, Nazism..they all have the same end point; no personal and individual freedom.

Through personal experience, our foundering fathers realized that if all freedom loving Americans and the Republic is to survive, it is vital fhat free thinking Americans must have and keep secure an equal voice in all elections, especially the next President of the United States fo America.

This view is antithetical to the Democrat Party. Make no mistake, today the radical and dangerous Democrat Party, with their BLM, Antifa allies, are actively working to destroy our freedom though longstanding corruption and violent tactics. This is an ongoing process was born of the Democrats centuries ago at Tammany Hall.

The election infection(corruption) was first spawned and perfected by the Democrats in local New York contests and the same is seen in many present day elections., How? By way of Tammany Hall and Boss Tweed. Knowing this, we understand why today New York and Chicago are such a miserable and dangerous places.

Election infection  is alive and well in the Democrat Party. We are witnessing the same century old corruption, in a “new suit of clothes”. Tammany Hall is ballot harvesting, 3rd party gathering and distribution of ballots, no ID required to vote, and violent intimidation. It is straight from the carpetbag playbook of the Democrat Party’s Tammany Hall.

Looking at today, does this sound familiar..”Throughout its reign, Tammany Hall had numerous ties with powerful, corrupt politicians and the affluent elite, as well as mobsters and crime families.” The father of modern organized crime and boss of the Genovese crime family, Mobster Lucky Luciano, was a large cog in the Tammany Hall  corruption machine. With Luciano’s conviction, mobster Frank Costello continued the gangster legacy at Tammany Hall. 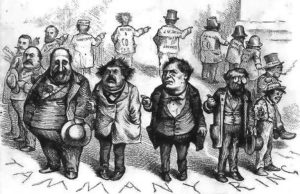 The same hideousness  is happening today by way of corrupt and dangerous politicians on all sides,  Call them out. Hold them accountable for their actions and unkept promises. Do not settle for anything but Freedom. Freedom is in your American DNA!  Stand up! Above all, don’t be afraid! Be courageous. Be a poll worker or watcher. Volunteer. Donate your time and/or money to freedom sustaining endeavors. Pray!

MASS MEDIA AS THE #1 ENEMY OF THE PEOPLE! WHY?

Without accurate information, we cannot make the best decisions for our families; That means our families are purposefully harmed through the Mass Media’s actions/inactions. Today’s media supports violence, corruption, destruction and murder by not reporting or under reporting accurately. We need to look no farther than our own back yard with Florida Today and the Orlando Sentinel as examples of this type of dangerous malfeasance. Those in the Media that make the conscious decision to hide, lie, fabricate or distort the news for personal gain, thereby hreatening our families, deserve no mercy.